Following the graduation of the Moscow Agricultural Academy in 1979, V.G. Sychev defended his candidate’s dissertation in 1984 and his doctoral dissertation in 2000. Since 1989, V.G. Sychev has been working in the Central Institute for the Agrochemical Service (now, the Pryanishnikov All-Russian Scientific Research Institute of Agrochemistry) as academic secretary, head of the Department of Coordination, deputy director, and, from 2003 up to now, director of the institute. In 2001, V.G. Sychev was elected Corresponding Member, and in 2007 Full Member of the Russian Academy of Agricultural Sciences. In 2005, V.G. Sychev was entitled full professor.

Academician V.G. Sychev is a prominent scientist in the field of experimental agrochemistry, soil science, and agrochemical ecology, who devoted more than 30 years to the study of urgent agrochemical problems. Many of his methodological works are well known in our county and abroad.  He created his own scientific school, which prepared hundreds of qualified agricultural scientists and agricultural chemists, including candidates and doctors of agricultural sciences. V.G. Sychev was honored with numerous awards for his scientific activities. 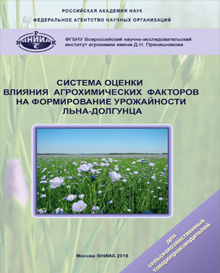